Featuring 'Blog From the Dog

Here at Rowden’s we’re advocates of flexible working and we embrace the cultural shift which has come about due to the pandemic. For many of us the ‘work-life balance’ has become an obtainable goal in an uncertain world. It does make sense however, for companies wishing to embed home working into their ongoing business strategy to be aware of the potential pitfalls. In this blog of a 2-part series, we ponder some of the risks to productivity and innovation and what businesses can do to mitigate them.

Can businesses function when offices are not at 100% capacity?

Just observing the footfall of commuters across London Bridge into the City of London and it’s obvious that we’re nowhere near the amount of human traffic we were all used to seeing - all walking in one direction in the bygone days of the rush hour. Indeed, a survey conducted by Bloomberg recently, the ‘Pret Index’, showed that Pret A Manger was still only running at 43% of its pre-pandemic food and beverage sales. Press reports have suggested that with schools having now completed almost one whole term, that commuter levels have increased. Yet this week, questions are looming again about reintroducing social distancing measures (including working from home) - understandably causing most businesses to feel on edge.

The City continues to operate at 50% capacity, according to data from Bloomberg and the world hasn’t stopped. So can we assume that working from home has had no impact on worker productivity and that businesses and the economy can function ‘normally’?

Reported in The Telegraph, Bart van Ark, managing director of the Productivity Institute at the University of Manchester explains that for organisations and their employees there have been 3 stages of adjustment through the pandemic.

The initial endeavour at the start of the lockdown in March last year by companies to get employees up, online and able to access their business apps. Companies were able to see the benefits of home working; the efficiencies it produced as well as creating employee autonomy and freedom. There was more of an acceptance that as long as the work got done, when and how had less relevance.

Once working from home was established, concerns were raised about burnout; the risk to mental health and wellbeing owing to the lack of face to face line management that long term remote working created. Boundaries between work and home became blurred and this in turn was a potential stressor.

And this is the stage we’re all currently in - the acceptance that working from home is here to stay. Now businesses need to put some structure around remote working, management and company processes. With 1 in 4 businesses reporting that they will allow their employees to work from home at least some of the time, this stage according to van Ark “Will be the most difficult part of the whole story.”

How does the UK's productivity compare to other countries?

So Stage 3 is less about crisis management and more about creating the modus operandi for the future. In an article reported in the Business section on the BBC website  ‘Most office workers will never return full time’, 70% of respondents said they couldn’t envisage a return to pre-pandemic office capacities.

“We're really in that phase now where, for the majority of organisations, they’re shifting from responding to the crisis that is unfolding and thinking more about what the new normal looks like.”

It’s interesting to see how UK businesses could use this pivotal point in the global workplace culture to address the disparate productivity levels when comparing UK output to other G7 countries. The chart below illustrates where the UK sits in comparison with its peers. Having a high average annual hour rate is a concern rather than something to shout about. Statistics showing UK workers put in more hours than their European counterparts raising questions about productivity and efficiency.

Stage 3 could be the opportunity the UK has been waiting for. Adopting hybrid working as a company strategy could pay dividends.

Productivity from the individual’s perspective

And how do home workers feel about hybrid working - do they feel more productive, almost 22 months into the pandemic? 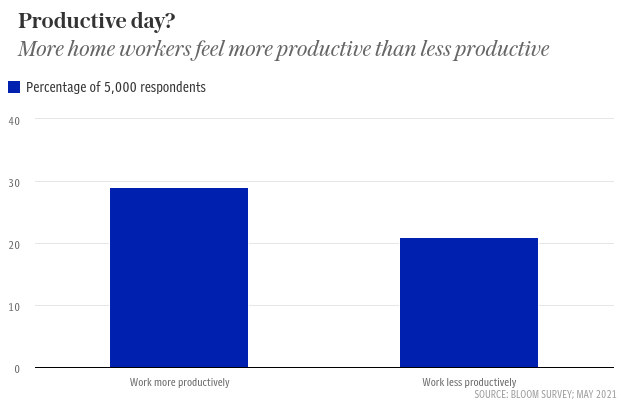 This survey, conducted back in May suggests home workers do feel more productive even though remote meetings, coordinating new staff inductions and performance management come with their own set of unique challenges.

Van Ark’s advice?
“Hybrid really needs a strategy. If you’re not really thinking hard about how to do this, and what you want to achieve with it, and what the bottlenecks are that you want to resolve, it’s going to end up in tears.”

Read part two of this series on hybrid working

Hybrid working is too large a topic to cover in one blog - read our next blog in the series here:

Striking the balance between office and home-based working

If you're seeking advice for your business, please get in touch with the lovely team at Rowdens who will be only too pleased to help you.

ROWDENS
About us
-  Your team

How we help
-  Year round advice
-  Business issues

Xero Gold Partner
-  Why your business should be using Xero